unfortunately, water doesnt want to start anylonger, at least on my PC!

On my PC, Water hang if I click on menu.
BTW I compress “C:\Program Files (x86)\RemObjects Software” to save space.

And I shut down the PC and rebooted but still the same issue.

When I look into the task-Manager you can imediately see, that Water isnt loaded into RAM, there is totally no sign of its execution.

i’ll have a look, thanx.

Hmm, do you have a stand-alone-PC? Could you test it there?

@shpend_hoti What Windows version do you have? And what .net Framework version? If you launches from the console it shows anything?

No I am getting confused here, When I open the seemingly .2169 Version of water and go to “about water” it Shows this!: 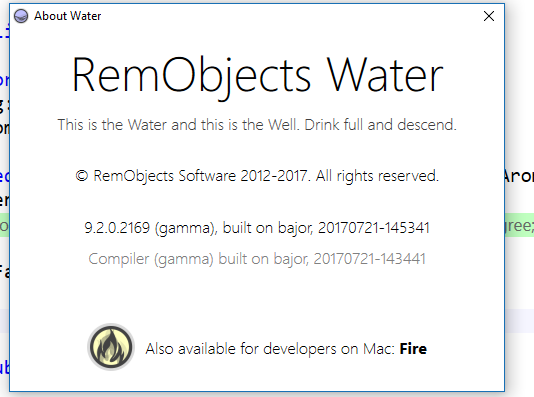 I have seeminlgy .2169 and water tells me, that a new Update is needed because I seemingly have just 9.0.0??

wait, i thought it doesn’t launch!? (ignore the update check. that it thinks it’s .0 is a bug)

why would that matter? i have two computers with Windows, i have a VM in my Mac Pro, which is where i usually work in Water, so that’s “contaminated”, in that it it has stuff that would influ3nce the behavior you see on a clean install of Elements/Water via setup. and i have the Surface, where i install the same setups that you guys do. Latest Water runs fine for me in both cases, so it’s. it that something in generally or totally broken with the binary we shipped Friday. (in contrast to, say, the Fire build from the week before which was completely DOA.

The Thing is, water is driving me crazy step by step

I know, this sounds like I am trying to kid you but I really had those seemed Bugs

Not sure what to tell you

There is actually nothing to say more about this

However, the important Thing is, that it works good now!